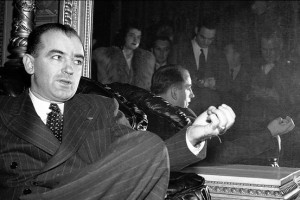 Senator McCarthy was correct in his accusations. Information obtained from old Soviet documents in Moscow and the Venona Intercepts proved it, yet democrats still talk as if the senator should be shamed and seen as an embarrassment by republicans.

Back in October, democrats attacked Senator Ted Cruz in the same manner. What, conservatives should be embarrassed for electing someone with integrity? Liberals invested millions to get Allen West out of office—he has no reserves about calling any of them communists.

Sixty years have passed since Senator McCarthy worked in vain to suck out the communists who slimed their way into top levels of government, along with public schools, colleges, and the media. These people never went away after the Second World War, and those of us on the far right know it. What they lost in numbers, they made up for in tactics and creativity.

The title “communist” is long gone, replaced with “progressive,” and the left have created a firewall between their ideas and the undisputable historical accounts of the devastating consequences following the practical application of those ideas.

It seems almost unbelievable when I think about it. When I consider the fact that more than a few of the elites running this country follow the principles of Hitler and Stalin with added lessons learned from the failed American communist resurgence in the 1960’s.

Another incredible thing, and one that I will right about in Strategy, is how easily manipulated we still are. Even with the incredible technology we have today and our great collective knowledge of history, a charismatic individual with a keen understanding of the game of power can still climb onto the world stage, preach the same spread-the-wealth dribble as his communist ilk of yesteryear, and have complete confidence that millions will follow him unconditionally straight into the fiery pits of totalitarianism. They’ll start with healthcare as they always have.

These people are real. The war between Good and Evil is alive and well, and choosing to remain ignorant and throwing our hands up it will not make it go away. Giving up isn’t simply acknowledging that things are going to be a drag. The result will be an oppressive central government. Labor camps, mass executions; it’s all happened before, it’s still happening today, and if we continue letting progressives chip away at our protections while distancing ourselves from those who point them out, there will be nothing preventing it from happening here.

From the movie Constantine: “I don’t believe in the devil. – You should. He believes in you.”