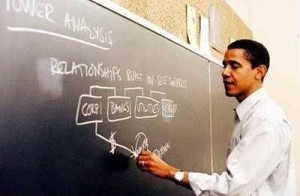 I wish real conservatives had real victories to speak of today, but they do not. A conservative victory really just means that our bloated federal empire will be intruding a little more into our personal lives instead of a lot more; and will continue exerting its influence over indebted states that seem more willing than ever to give up their rights in exchange for federal income. Also disheartening is that many voters (or would-be voters) do not even distinguish republicans from democrats, and why should they?

The same spread-the-wealth ideology that destroyed the lives of hundreds of millions of people last century has so ingrained itself in American society that big government institutions are not only supported by republicans, but are often fought for by that very party which once stood against them.

It is not happenstance that republicans have moved to the left. Sure, there is the usual blend of corruption, institutionalization, fear of losing senior voters; but the progressive way of compromise always gets liberal feet in the door.

Institutionalization: When gas prices started racing up, people screamed and screamed. Now the general public has accepted the new cost, which is over twice what it was a decade ago. If gas prices tick down a bit from a new high, who’s gonna celebrate?

There is an observation in Saul Alinsky’s book Rules for Radicals, concerning compromise: “If you start with nothing, demand 100% and compromise for 30%. You’re 30% ahead!” That’s Obamacare. Liberals demanded universal healthcare, but settled for 30%. There was no compromise, republicans lost.

He goes on to point out how important compromise is to having control of power. I’ve listened to some of my right-leaning friends tell me how the problem with the Tea Party is that they refuse to compromise. But liberals do not compromise either, not really—30% is the real goal.

The strategy, combined with a friendly media gives them huge negotiating ability; and the further the country drifts to the left, the more extreme conservatives appear, and the less negotiating power they have.

I’m not saying that Alinsky’s guideline for compromise is a secret tactic of liberals, it’s not; but it is a tool in the art of getting-what-you-want that is seldom employed on the right.

The book is full of useful tips for organizing. Of course, incorporated is the expected Marx-style ramblings from someone who, on the one hand, had great mental capacity for applying laws of human behavior to organize followers in battle, but also stuck with the childish liberal position over Haves and Have-Nots. Regardless, the pragmatic methods in Alinsky’s book hatched one of the greatest politicians the world has ever seen.

The Soviet States of America 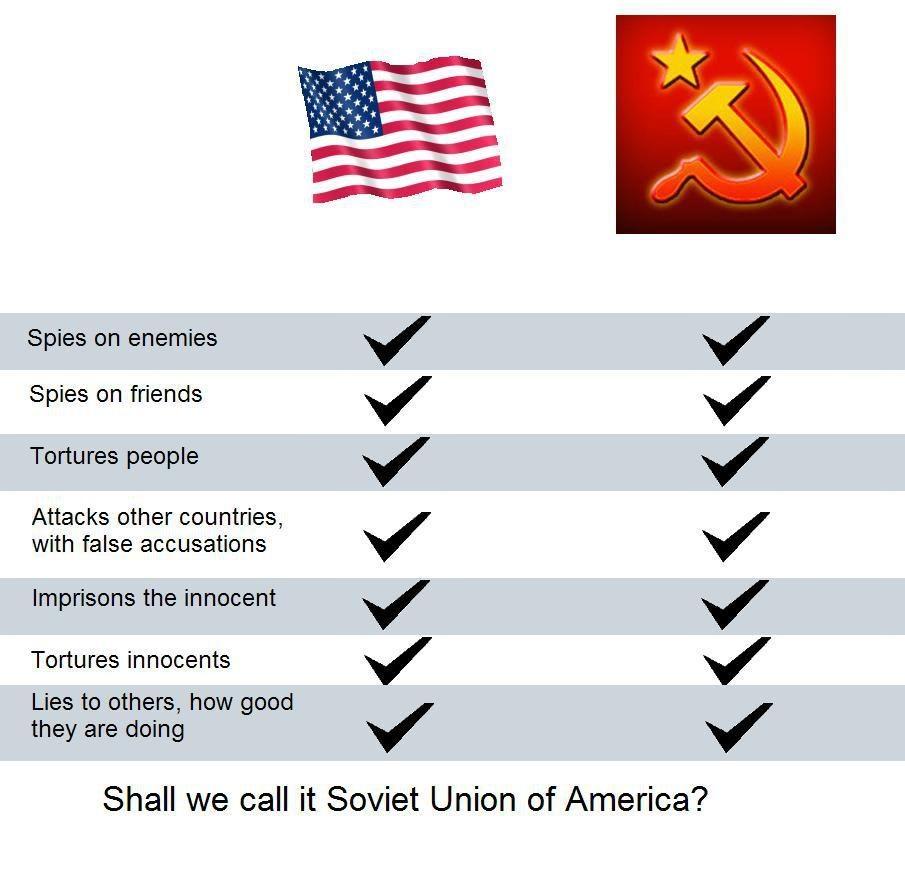 In response to a viral meme comparing the US to the former Soviet Union.

The United States has spies, tortures people, attacks other countries, has lots of nuclear weapons, and generally has a finger of interest in every part of the world.

The Soviet Union also had spies, tortured people, attacked countries, had a vast military with lots of nukes, and influence around the world.

Only one of these nations had to rely on imperialism and oppression to survive, however, and, in the end, was left spending an enormous portion (27%) of its GDP to support its military. By the mid-1980’s, that was enough for the USSR to stay around 10 years behind the US in defense technology. In comparison, the US was spending about 7% of its GDP for defense under Reagan, and its citizens weren’t starving.

During the seven decades of the Soviet Union, millions of Soviet citizens starved to death, and tens of millions more were tortured and executed. Stalin’s secret police, the NKVD, for example, hosted mass executions and ran forced labor camps (Gulags).

I have not read of any enormous famines, mass executions, or torture camps in the last century of US history. Those documents must have all been burned by the Reagan Administration. And concerning Guantanamo Bay, I do not believe water-boarding or force-feeding of terrorists in any way compares to the atrocities committed upon innocent people by Soviet leaders.

It should be noted, however, that the US Federal Government (the same one that now has control of our healthcare) has indirectly killed its citizens in the name of the “public good.” Such was the case of the estimated 10,000 citizens who died after the US Government deliberately poisoned commercial alcohol during prohibition. Here’s the story.

And what about our spy programs? If it weren’t for U2 flyovers, President Kennedy would have been left completely in the dark about the Soviets arming missile silos in Cuba with enough nuclear weaponry to kill eighty million US citizens, instantly!

At the height of the Cold War, the USSR had thousands, THOUSANDS, of nuclear-tipped ICBM’s aimed at US cities, military bases, and other strategic targets around the world. Likewise, the US had thousands of nuclear weapons pointed at Soviet cities and military bases, and a growing missile defense network. Even today, there is little doubt that Russia, and China, have nuclear submarines parked off the US coasts. In the game of world power, there is simply no other country willing or able to stare down the great nuclear powers.

The fact is, the United States does not compare to the former Soviet Union. Soviet leaders murdered and tortured citizens, deported entire nationalities, and terrorized neighboring countries. It should also be incontestable why the United States had to and must continue to remain the dominant military power of the world, no matter what. Today, however, any defense of the US spy and nuclear arms programs will likely remain mute to progressive ears. Like it or not, the world is a big power game and always will be.